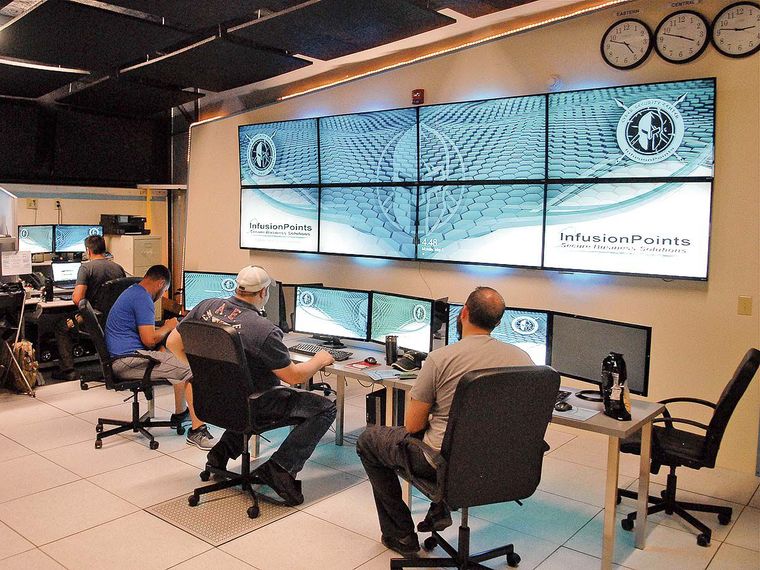 InfusionPoints LLC in North Wilkesboro has announced plans to grow to a staff of 30 high-tech jobs in its cyber security center here in the next two years.

For the full article please refer to HERE.

The program management, technology and cyber security firm helps various types and sizes of companies protect their customer, employee and other information, said Gary G. Daemer, president and founder of InfusionPoints. The company currently has 13 employees, which includes three interns, in North Wilkesboro. It has an additional seven employees at its office in Washington, D.C. Daemer said InfusionPoints’ growth is partly a result of its ongoing relationship with Dell Services Federal Government (DSFG), a division of Dell Inc. InfusionPoints helped DSFG’s Dell Cloud for U.S. Government meet security requirements for provisional authorization-to-operate from the Federal Risk and Authorization Management Program, announced last month. Dell Cloud for U.S. Government is multi-user cloud platform designed for federal, state, local and tribal government agencies, as well as government contractors, federally funded research and development centers and higher education institutions. The “cloud” refers to massive data storage centers around the world. DSFG said in a press release that “key delivery partner” InfusionPoints developed operations and security controls for the new cloud platform. InfusionPoints is still working with DSFG by managing what it developed.

“This is a major milestone for InfusionPoints and our cyber security center” in North Wilkesboro, said Daemer. “As a result of this achievement, we are starting to see new customers lining up to host their systems” on Dell Cloud for U.S. Government. InfusionPoints’ cyber security center was built in Wilkes County to support this effort, “not only because we love the area, but because we wanted to bring high-tech, high paying jobs to rural North Carolina,” he said.

Daemer’s wife, Shirl Zeimer Daemer, is a Wilkes native. InfusionPoints’ cyber security center is in the 7,500-square-foot, former Hayes Printing building on N.C. 268 East, which the company purchased and renovated about three years ago. Once inside the front door, the first thing a visitor sees on the lobby wall ahead is a colorful digital map of the world depicting real time international attempts to probe, steal information from or damage computer networks. As part of company’s services to clients, four InfusionPoints employees monitor multiple smaller screens with real time data on cyber security threats around the world in a nearby room. They utilize software developed by San Mateo, Calif.-based AlienVault. “It’s the engine that monitors networks, applications and log files and gives alerts by creating tickets and also visually (on screens) when attacks occur,” said Daemer. ‘It identifies where the attack is coming from and what kind of attack it could be. We typically see malware attacks and probing.” Malware refers to a variety of hostile or intrusive software, including computer viruses. Probing software scans computer networks for security weaknesses. Daemer said “bad actors,” the term for people who try to infiltrate networks and data banks with malicious intent, can be connected to foreign governments, terrorist groups, organized crime in the United States and other countries or other entities—or they can be individuals acting independently. “These bad actors are cyber criminals and they send chills down the spine of many business owners.

These criminals are dominating the cyber world with their tricks and sneaky tactics and are going undetected for way too long,” he said. “Companies are struggling to fend off cyber attacks as these criminals get faster, sneakier and more creative” in ways to steal information. Daemer said InfusionPoints’ consultants combine a unique blend of technology and business skills to help clients. In addition to security monitoring, InfusionPoints consultants help companies build secure computer systems, make existing systems more secure and analyze and test the security of systems. Daemer said computer system builders should have engineering degrees. “Analysts need to have a good basic knowledge of systems and know how networks and applications work. They can be people with an associate degree,” he said. “A good tester needs to be able to cause chaos and find ways to misuse computer systems…. People who are self-taught, inquisitive and have a lust to never stop learning do best as testers. From an early age they have learned to build computers and networks on their own,” said Daemer. He emphasized that thorough background checks are conducted before people are hired by InfusionPoints. “Ethics are very important. Just because you can doesn’t mean you should.” He added, “We always have two people together when there is testing.” Companies pay InfusionPoints to see if it can infiltrate their computer systems and facilities. “We show them how vulnerable they are,” which he said often includes a lack of security at physical facilities. InfusionPoints’ consultants sometimes break into clients’ buildings to show how easily it can be done. Also to reveal security weaknesses, said Daemer, they gain entry into facilities of clients by portraying other types of service providers and attach devices to clients’ computers to demonstrate how data can be stolen.

Banks and some other regulated entities are required to have their security tested. He said the company partners with Wilkes Community College and the Business Industry Education Forum on an internship program to find some of the growing number of employees it needs. Network programming and computer programming students at WCC can apply for internships at InfusionPoints and are selected on a competitive basis. Interns spend time in the InfusionPoints computer research lab “learning to be IT security gurus. They need to be able to look at problems from a lot of different angles,” he said. Interns and fulltime employees of the company can participate in competitions between teams trying to hack into computer systems while at the same time building defenses to prevent others from hacking. InfusionPoints sponsors some of these events. Daemer has had a long career as a management and technology security consultant, working for multiple companies and in various fields. He has a bachelor’s of science degree in electrical engineering from the University of North Carolina at Charlotte, a master’s degree in systems engineering from Virginia Tech and multiple professional designations. For more details, go to http://www.infusionpoints.com/ and http://VNSOC360.com.